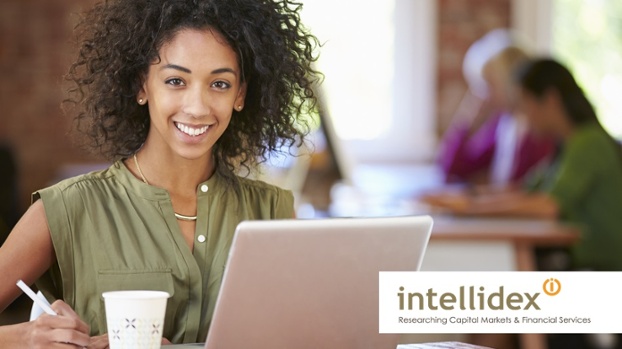 Suitability: The Stanlib Swix 40 ETF is ideal for investors with a long-term investment horizon which gives the portfolio enough time to weather short-term volatility synonymous with equity investments. Because the ETF tracks the largest companies on the JSE, it is an ideal vehicle for exposure to quality blue-chip companies and is less volatile than mid- and small-cap stocks. Furthermore, the 40 stocks are across industries and thus bring some diversification and can be considered as a core investment for the long term. The fund has slightly lower costs than close alternatives and a lower tracking error.

What it does: The Stanlib Swix 40 ETF aims to mimic the performance of the FTSE/JSE Swix top 40 index in terms of price performance as well as income from the component securities of the index. However, this index differs from the top 40 index in that it only considers the free-float market capitalisation of companies that are held on the JSE register. By considering the JSE register only, it means that dual-listed stocks are down-weighted because a significant portion of their shares are held offshore.

A free-float adjusted market capitalisation format is based on the market capitalisation of each company excluding locked-in shares such as those held by holding companies, founders and governments. The ETF is therefore more representative of the universe of shares actually available to South African investors.

The fund is rebalanced quarterly in line with the FTSE/JSE index rebalancing methodology and from time to time as a result of corporate actions.

In the long run it will theoretically outperform other major asset classes such as bonds and cash, albeit at elevated volatility.

Easy access to the largest companies on the JSE through one investment at a lower cost than acquiring them individually.

Many of the biggest companies on the JSE earn a significant portion of their earnings outside SA. The rand’s severe depreciation over the past few years, accelerating over the past few months, means foreign earnings are increased substantially when exchanged into rands.

Lower volatility than both small- and mid-cap stocks.

Market capitalisation weightings skew the portfolio towards the largest stocks, which diminishes diversification benefits. The Swix index partly addresses this skewness by rebalancing according to South African held shares. Companies like Anglo American and BHP Billiton therefore have a relatively low weight compared to the general Top 40 index.

ETFs are passive instruments and do not make active bets, which is a concern in periods of poor economic activity, given that broadly, equities returns are linked to economic activity. However, the significant non-rand earnings component reduces correlation to the SA economy and empirical evidence shows that active portfolio management, on average, does not outperform passive investing.

Top holdings: The top 10 holdings constitute 59.3% of the overall portfolio. Swix categorisation excludes three companies that are found in the non-Swix top 10. The Swix weighting increases the proportion of financials, taking up 27% (non-Swix: 22%) of the portfolio and de-emphasises consumer goods, which constitute 20% (non-Swix: 31%). 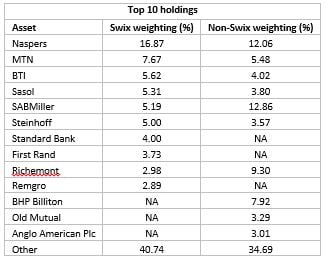 Risk: This is a 100% investment in equities, which is a riskier asset class than bonds or cash. It is volatile, but the returns over time should compensate for volatility. Constituent companies operate in several jurisdictions, mostly emerging economies, which somewhat elevates political and currency risk. However, the sectoral and geographical diversity of the constituents diminishes the risks to a degree. 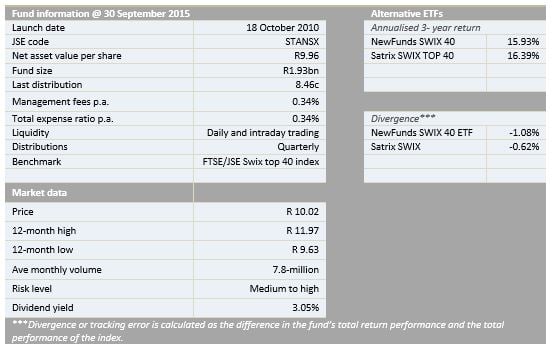 The total expense ratio is 0.34%. Additional costs associated with trading the ETF include bid-ask spreads and brokerage fees.

The fund has generated an annualised return of 16.99% for the past three years with a negligible tracking error. It has fared marginally better than both Absa’s NewFunds Swix 40 (15.93%) and Satrix Swix top 40 (16.39%), both of which also track the Swix top 40 index.

The value of broad equities portfolios is driven by general economic performance as well as the sectoral allocation.

Both local and multilateral institutions’ projections on SA economic growth are muted. GDP growth is not expected to exceed 2% this year. While this is worrying, constituents of the ETF generate significant earnings from markets outside SA. That makes the global outlook and the rand exchange rate important factors. 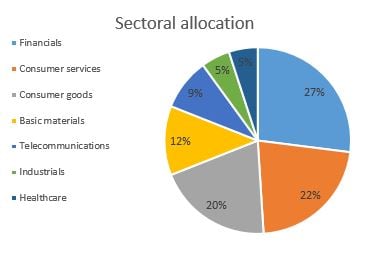 The fund is heavily exposed to financials, consumer services, consumer goods and basic materials – accounting for 81% of the fund. More than a quarter of the fund is invested in financial companies. A large portion of earnings for these companies is generated within SA, which makes domestic factors more important. Muted growth prospects and rising interest rates pose a big threat to financials.

Both consumer services and goods are driven by global consumer spending – the biggest and most stable component of global income –  which is influenced by global interest rates and economic performance.  Commodity prices are at historic low due to a supply glut and waning demand from China. Recovery of basic materials is dependent on the correction of supply and demand forces.

There are two direct comparable ETFs which track the FTSE/JSE Swix top 40 index in both price and income performance: Absa’s NewFunds Swix 40 and the Satrix Swix top 40. Stanlib Swix 40 has performed marginally better than both. The total expense ratio of the NewFunds Swix 40 is comparable at 0.33% whereas it is higher for Satrix Swix 40 at 0.45%.