Energy and mining dominate this note by Intellidex, albeit on different ends of the sentiment spectrum. From politics, the Rand, and the sectors that have investors' attention, this note is stacked with insights on local markets, and the locally-themed ETFs that are affected.

In what has become something of a trend, JSE-listed foreign ETFs were hedged by the rand, which dropped 7.3% month on month against the dollar. This saw a basket of international ETFs closing 6.31% higher in rand terms. A basket of local ETFs declined 2.25% in yet another disappointing performance.

Locally, the energy sector took centre stage. Eskom resumed load-shedding and warned that the country should brace itself for more frequent power cuts over the next 18 months as the power utility steps up overdue maintenance on ageing coal power stations.

On a positive note, Mineral Resources and Energy Minister Gwede Mantashe told delegates at the Mining Indaba in Cape Town on Monday that government had conceded that it must allow mining companies to produce energy for their own use. At present, private companies and private individuals have been able to produce only minimal amounts.

Anything more would require registration. He also hinted at the creation of a second power generation company parallel to Eskom. Both announcements were sentiment positive though they were received cautiously by investors who focus more on policy implementation and less on policy promises.

In terms of economic data, factory output declined by more than markets had expected in November 2019. Annual production fell by 3.6% -- its sixth consecutive decline. That is in line with the Absa PMI which lost 1.9 points to hit 45.2 points in January, the lowest level since September 2019. Mining production fell 3.1% y-o-y in November.

As expected, consumer price inflation ticked up to 4.0% y-o-y in December, from an almost nine-year low of 3.6% in November. Consumer confidence remain in the doldrums: the FNB/BER Consumer Confidence Index stayed unchanged during the fourth quarter of 2019 at -7 points despite a reprieve from the central bank, which cut the repo rate by 25 basis points in its first meeting of the year.

SA is locked onto a low-growth path. Intellidex economic forecasting models project measly 0.6% GDP growth this year and 1% in 2021. Load-shedding remains one of the key risks to SA’s economy. There has been much focus on self-generation and new generation announcements at the recent Mining Indaba which was held in Cape Town. We think both are being overplayed. The path on each is very long and complex. Self-generation requires many regulatory changes and consultations and concurrence from the National Energy Regulator of South Africa on the registration process.

The need for a new generation company was mooted only a few weeks ago, raised in the ANC Lekgotla and then at the Mining Indaba, but the department of mineral resources and energy has done no work on it at all. Overall, we think the announcements were more about public relations and investors should be cautious. Policy in this area is atomised with the energy “war room” barely meeting at all. There is no cohesiveness of thought in the governing party, which is pulling in many different directions.

We maintain the CoreShares Scientific Beta Multifactor Index ETF as our pick for investors seeking exposure to local equities. The fund fits our mould of a good investment philosophy. Its methodology tends to favour quality stocks which are highly profitable - exactly what we think investors need under prevailing economic conditions.

It also considers valuations (price multiples) of the counters in its selection process, which we think is important. The fund also has a decent amount of assets under its management. The only gripe we have with the fund is its high total expense ratio of 0.45%.

There are extensions to this core local equity exposure that can be added in a tactical sense as a satellite fund. The NewFunds Equity Momentum fund (down 0.7% in January) is worth considering. It has performed far ahead of other equity funds in the past few months and has a 12-month return of 18.8%, which is phenomenal considering that the local bourse has been largely flat over the past few years.

Adding a commodity ETF to your portfolio improves diversification because commodities march to the beat of their own drum – they are not in sync with broader markets. Traditionally, gold is the preferred addition to an investor’s portfolio because over longer periods it has shown to be the least correlated with other assets. However our preference, based on our medium-term outlook, is between rhodium and palladium. 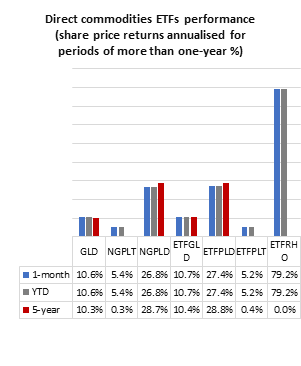 The new vehicle emission laws in Europe and China are driving demand for both commodities and this is expected to continue in the foreseeable future. We are slightly more inclined towards rhodium because it is scarcer, with lower extraction rates from PGM ore. The primary production of rhodium is somewhat inelastic and is expected to decline moderate moderately over the medium term.

Important note: These ETFs do not qualify for a tax-free savings account.

There's plenty more from where that came from. The team at Intellidex have more insights for the month of February. To see more in-depth analysis and market insights (global and local), check out the full note here.