10 Down Under: Australian shares to check out 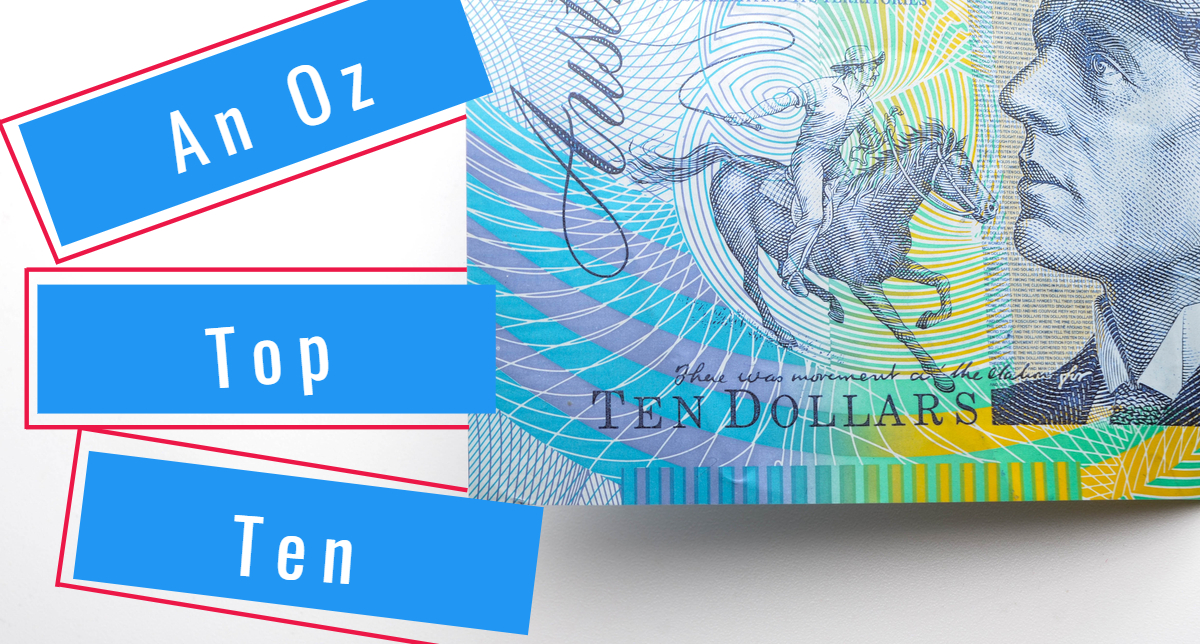 The a2 Milk Company Limited (a New Zealand company) produces and sells a2MC branded milk and related products through its ownership of intellectual property that enables the identification of cattle for the production of A1 protein-free milk products. The company operates in Australia and New Zealand; China and other Asia, the United Kingdom and the USA.

While the health benefits of a2 Milk for those with digestive issues are still to be fully proven that hasn't stopped consumers, especially in China buying up this premium milk brand by the tanker load. A2M is reflective of a multiple of food producers and other associated agricultural companies listed on the ASX targeting the Chinese and broader Asian market with Australian produce. Indeed, Australian government policy is very supportive of the notion that Australian can be the breadbasket for Asia's emerging middle-class food consumer. Market Cap $14.6b, PE TTM 47.4 Yield 0.00%

The hottest stock in the hottest sector in Australia right now. Afterpay operates a Buy Now Pay Later (BPNL) business targeting young tech-savvy consumers. It allows retailers to offer installment plans for shoppers either online or instore, allowing a purchase to be paid for in four installments, due every two weeks. Afterpay is a credit line for customers, where they use it to buy items from a store (online or in a physical shop) and pay the money back later.

If they do not adhere to the payment schedule, they are charged late fees until they have paid off their installment much like credit card companies but without a tedious application process and credit checks. The product has taken the retail market in Australia by storm in the last few years with merchants and consumers adopting it at a rapid pace. It has dipped its toe into the US market, and initial signs are positive for its expansion into a market much more substantial than Australia.

The share price has rocketed even though the company is still not turning a profit. Many supporters point to other technology companies who were unprofitable for many years as they sought to grow rapidly and capture market share at the expense of short-term profitability. Market Cap $19.0b, PE TTM 0.0 Yield 0.00%

ARB Corporation is engaged in the design, manufacture, distribution, sale of motor vehicle accessories and light metal engineering works. ARB is Australia's largest manufacturer and distributor of 4×4 accessories. ARB has a vast international presence, with an export network that extends through more than 100 countries around the globe.

No doubt you have seen their products on a Toyota Hilux or Toyota Landcruiser here in South Africa down through the years. This Brown family founded the business and continue to run the business today. It has been a huge Australian success story, and the company continues to expand into new markets and its expand its product range. It is one of the most solid Australian small-cap stocks around and has delivered healthy returns to shareholders since listing. Market Cap $1.4b, PE TTM 26.9 Yield 2.1%

Since Computershare was established in Melbourne in 1978, its operations have expanded across five continents. Computershare primarily provides stock registration and transfer services to companies listed on stock markets, but also offers technology services for stock exchanges, investor services for shareholders and employee share plan management. Indeed, many JSE listed stocks use its products services as EasyEquities account holders would be aware.

Its services are generally hidden far from financial markets on a day to day basis but they are mission-critical for the operation of equity markets globally. Its customers tend to very sticky and long-standing providing it with a good steady revenue stream. It has expanded into other product areas in recent times, but its share register business is still its largest division. A somewhat staid and unexciting business but a solid ASX midcap. Market Cap $7.3b, PE TTM 18.2 Yield 3.4%

It would be remiss not to mention the current largest company on the ASX when talking about ASX shares. CSL is not only the largest company currently listed on the ASX, but it is also one of the greatest success stories. It listed as microcap just over a quarter-century ago with its market cap on listing of $299m but today commands a market cap of $130.5b. The Commonwealth Serum Laboratories (CSL) was established in Australia in 1916 to service the health needs of a nation isolated by war. Over the ensuing years, CSL provided Australians with rapid access to 20th-century medical advances including insulin and penicillin, and vaccines against influenza, polio and other infectious diseases.

CSL Limited was incorporated in 1991 and listed on the Australian Securities Exchange (ASX) in 1994. It has proved a stunning success of government privatisation. Since then, CSL has acquired several companies over the years including Aventis Behring, and now known as global biotech leader CSL Behring. CSL also acquired USA plasma collector Nabi thus forming the world's premier and largest blood plasma collection company in CSL Plasma. It acquired Novartis's influenza vaccine business, now known as Seqirus which is currently the world's second-largest influenza vaccines company and finally it acquired Calimmune, a leader in field of gene-modification and cell delivery technology.

Combined all these businesses, they make CSL the innovative global leader it is today. CSL is currently the world’s second largest biotechnology company behind Amgen, and I would not bet against them becoming the largest given the high-quality management team at the helm of CSL today. If you want a highly quality ASX large-cap, they don't come any bigger than CSL. Market Cap $130.5b, PE TTM 47.3 Yield 1.3%

As the saying goes, there are the only two certainties in life death and taxes. Well, enter InvoCare, which is a leading international provider of funeral, cemetery, crematoria, and related services. It currently operates, and is a market leader, in Australia, New Zealand, and Singapore.

InvoCare presently operates 270 funeral homes and 16 cemeteries and crematoria, across its three markets. InvoCare employs around 1,800 people globally and has a current turnover of approximately $500 million a year. The company has been a steady grower over time and a regular dividend payer, and it is seen very much as a defensive stock.

Despite this, it has seen impacts from CV19 with smaller funerals impacting revenue. However, InvoCare is still very much seen a defensive core holding for a lot of portfolios, and the recent CV19 share price weakness could provide an entry opportunity for long term holders. Growth will come from acquisition of private family owned businesses in the sector and its expansion into the family pet market. Market Cap $1.2b, PE TTM 19.0 Yield 4.6%

Reliance Worldwide builds innovative and easy-to-use fixtures to enhance the productivity of plumbers globally. Its core product centres around the Push to Connect technology which is distributed under the Sharkbite brand. The specific technology enhances the end-user experience by allowing plumbers to skip time-consuming tasks such as soldering and crimping pipes. Instead, they can just push the two pipes into the fitting.

The company has successfully expanded globally, building out a solid foundation with growth that is showing no signs of slowing. The company has invested significant time and money in optimising its global supply chain and distribution networks. Importantly, this has not taken the place of R&D, ensuring a dominant position in key global markets, including the US, UK, AUS and Europe.

While plumbing is not your sexy technology business, it doesn't mean it is not a good business. RWC is a substantial global industrial products business with an attractive growth profile which would be an excellent diversifier for any portfolio. Market Cap $2,3b, PE TTM 19.6 Yield 3.3%

Is what South African's would call an investment holding company. In the last 117 years, Australia has seen two World Wars, the Great Depression, the introduction of the motor car, 30 Prime Ministers, and every year, Washington H Soul Pattinson (SOL) has paid a dividend. Over the last 40 years, total shareholder returns have compounded at a rate of 17.3%. This is a record that rivals that of some of the most well-known investors globally.

Indeed, its dividend has grown 9% CAGR over the last 20 years. SOL is controlled and run by the Millner family with Rob Millner, the long-standing Chairman of SOL. While SOL started life as a pharmaceuticals business, today it is a cornerstone shareholder in ISP and Mobile Phone operator TPG Telecom one of the largest in Australia, the largest brick producer in Australia, Brickworks, Queensland based coal producer New Hope Corporation, and dozens of other smaller companies.

Also, unlike investment holding companies in South Africa SOL trades around its stated NAV which is predominantly made up of ASX listed equities. Market Cap $5.0b, PE TTM NA Yield 2.9%

Sydney Airport is the gateway to Australia, welcoming around 42 million passengers a year, well it did pre CV19. Sydney Airport has been listed on the ASX since 2002. Sydney Airport was a top 30 listed company in Australia before CV19 which has seen the stock price halve since February 2020.

The airport though is still one of Australia's most important pieces of infrastructure. It is international gateway and an essential part of its transport network, and pre CV19 it was connecting to more than 90 destinations around the world. Sydney Airport is one for the deep value investors for sure. With the second wave of CV19 now hitting Australia, domestic and international travel have been tightened once again.

Passenger volumes are down 90% over the last three months. Pre CV19 Sydney Airport was a reliable dividend payer with a yield of around 4.2%, and the stock was part of most income-focused portfolios. This one is not for the faint-hearted that is for sure. It does however provide a leveraged play to a post CV19 world. Market Cap $12.6b, PE TTM NA Yield NA

Xero Limited is a New-Zealand-based accounting software company founded in 2006 and listed on the ASX. Xero's cloud-based accounting software connects accountants and bookkeepers with their clients in real-time. It also allows small business to integrate with their banks and other cloud-based software providers to run their business efficiently and effectively by cutting down on vast amounts of admin time.

It leads the New Zealand, Australia, and United Kingdom cloud accounting markets, employing a team of more than 2,000 people. It also operates widely here in South Africa and is moving into numerous other markets globally. It just recently turned a profit which could mark an interesting inflexion point. As a former CA it is the best accounting software I have ever used. Market Cap $12.8b, PE TTM NA Yield NA.

Mark Tobin is the founder of weekly newsletter subscription Coffee Microcaps.
You can check them out here.

Any opinions, news, research, reports, analyses, prices, or other information contained within this research is provided by Mark Tobin, founder of Coffee Microcaps as general market commentary, and does not constitute investment advice for the purposes of the Financial Advisory and Intermediary Services Act, 2002. First World Trader (Pty) Ltd t/a EasyEquities (“EasyEquities”) does not warrant the correctness, accuracy, timeliness, reliability or completeness of any information (i) contained within this research and (ii) received from third party data providers. You must rely solely upon your own judgment in all aspects of your investment and/or trading decisions and all investments and/or trades are made at your own risk. EasyEquities (including any of their employees) will not accept any liability for any direct or indirect loss or damage, including without limitation, any loss of profit, which may arise directly or indirectly from use of or reliance on the market commentary. The content contained within is subject to change at any time without notice.