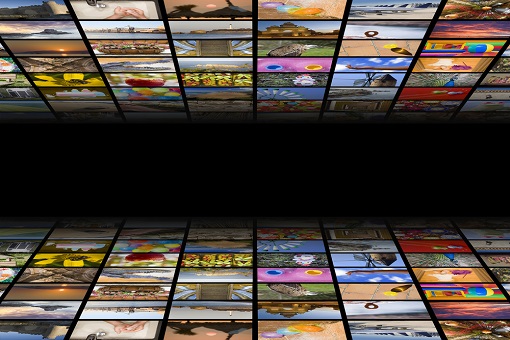 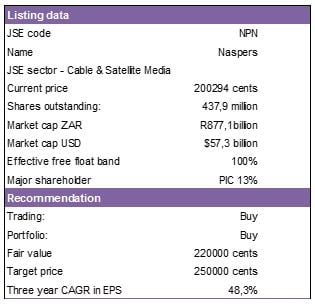 Recently, Naspers Ventures was set up in San Francisco to form partnerships with technology entrepreneurs. A former eBay (C2C & B2B ecommerce) and Trulia (real estate site) executive heads the small team of up to fifteen staffers.

Late last year, Naspers was behind the $100 million series A funding of letgo, a mobile marketplace for second hand goods. This past week letgo merged with Wallapop.

The latest move is a $15 million series B funding of education technology social learning network Brainly. 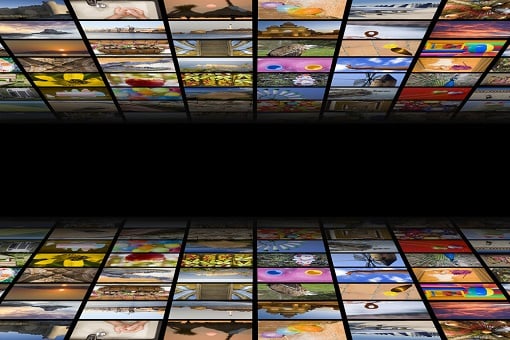 Brainly was founded in Poland in 2009 by three Polish entrepreneurs with the objective of bringing the usefulness of study groups to the internet. Today, 60 million students each month across the world use the Brainly platform.

Series A or B funding denotes whether this is first or second round funding. Series A is a first round of venture capital funding when a seeded start-up brings in outside investors whereas series B is in a more developed business that has established important milestones.

The fact that Naspers is on a trailing PE ratio of almost 100x does not imply it is necessarily expensive. A PE ratio, as I have cautioned numerous times, has to treated with circumspection, particularly with growth assets, and is one of a number of metrics that form part of a valuation assessment.

Naspers has substantial development assets that continue to subtract from earnings. Between 2011 and 2015 ecommerce alone recorded cumulative losses of R14,5 billion. In H1 of F2016 alone ecommerce made an EBITDA loss of R3,5 billion. On a reasonable assumption on progress with business development, new ventures and organic evolution of the existing asset base and new ventures, then earnings could be three times the earnings reported for the year ended March 2015. On that basis, the forward PE drops to under 25x.

If one wishes to use a PE as a gauge, then the fully consolidated results of Tencent are a better yardstick of relative value and in keeping with a business growing at 30% for the foreseeable future. At HK$155 per share, Tencent is on a forward PE of 28,6x on my 2016 earnings estimates.

Whilst Naspers appears expensive that has not meant it is a poor investment or does not offer further upside nor is this a true reflection of what normalised and potentially sustainable earnings could be once the developmental assets start contributing.

The more traditional assets, of which MultiChoice is the most important, remain an important engine of cash flow whereas the 33.8% investment in Tencent is now yielding accelerating cash dividends, with R3,7 billion just on my 2016 projection alone assuming prevailing exchange rates.

Commencing with the result for the year ended 31 March 2016, Naspers will be reporting in USD rather than ZAR.

Over 70% of revenue on an economic interest basis, including a proportionate share of the revenue of associates and joint ventures, is external to South Africa. Functional currencies of the businesses are unaltered with all figures translated to USD. Dividends will continue to be declared in ZAR, with the exchange rate announced at the time of the dividend payment.

The comparatives on core earnings are as follows in the table, together with my estimate for the year ended March 2016.

My DCF value on Tencent based on free cash flows remains HK$174 per share with my sum of the parts value at HK$180 per share.

At prevailing currency rates, my value on Naspers, which takes Tencent into account and adds my derived values on MultiChoice, Novus and other print, and Ecommerce together with the market cap of mail.ru and then subtracts debt at centre, is R1,3 trillion. Deducting a 20% fair value discount, to provide a cushion for error, takes this to R1,0 trillion or R2370 per share. 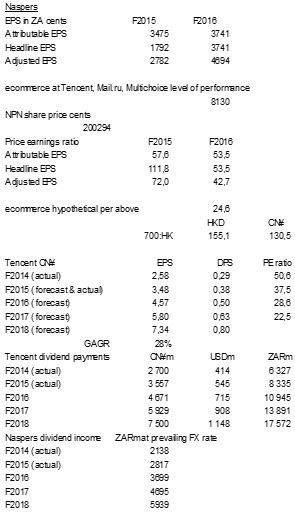 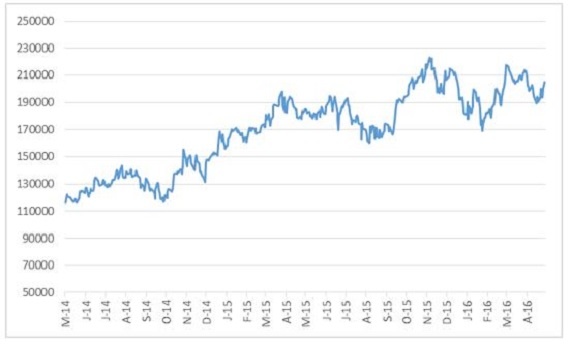