Performance review: Industrial companies have been the best performers on the JSE over the 10 years to end-September. This has been the top performing ETF in the last 10 years (many ETFs are less than 10 years old, so others have performed better but have a shorter track record). The Satrix Indi 25 ETF, delivered average growth of 16.27% a year. The fund’s returns for shorter periods are also impressive: 19.63% a year over the seven-year period and 18.16% a year over the five-year period. 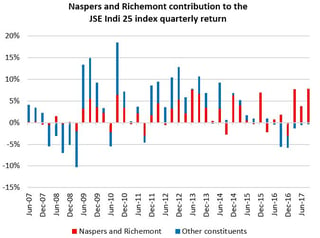 The Satrix Indi 25 has benefited immensely from strong performances by Naspers and Richemont, which now account for half of the fund. Over the past 10 years, Naspers delivered 32% a year (compounded annual return, assuming reinvestment of dividends) while Richemont returned 22% a year. In the graph alongside we’ve estimated the relative contribution of Naspers and Richemont to the growth of the index on a quarterly basis. In the last three quarters, the two companies have been responsible for all of the growth, and have often contributed most of the growth in previous quarters.

Outlook: The JSE Indi 25 is dominated by companies that generate the bulk of their revenue from markets outside SA. Its top five counters, accounting for more than two thirds of its market capitalisation, are heavily exposed to China, Europe, the Americas and Nigeria, including the top 3, Naspers, Richemont and British American Tobacco (see Top Holdings, below, for the full list). This has some advantages. Most of these markets have better growth prospects than our local economy. The International Monetary Fund is expecting world growth to come in at 3.5% this year and 3.6% in 2018. SA, unfortunately, is expected to continue lagging the rest of the world with growth of just 0.7% this year.

The exposure to markets outside SA also means the fund is not heavily exposed to the rising political uncertainties in the local economy. SA is going through a difficult patch politically. Political and policy uncertainty along with perceptions of widespread corruption have depressed business and consumer confidence. This is affecting local businesses the most. With more than two thirds of the revenue in foreign currency, the JSE Indi 25 also stands to benefit if the rand weakens further – which seem the most likely outcome if our economy remains depressed, political instability continues and further credit ratings downgrades ensue. The rand has so far helped returns for this fund: it has weakened from about R7/dollar 10 years ago to over R14/dollar today. 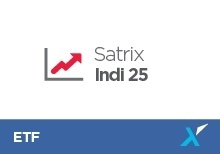 Suitability: This fund is ideal for investors with a long-term investment horizon (more than five years) who can tolerate short-term volatility associated with equities. It can be used to diversify an equities portfolio that is heavily exposed to resources or financials

Drawback: Like other capped indices on the JSE, the Satrix Indi 25 is dangerously overweight in a few counters. Half of its funds are in Naspers and Richemont, both of which generate most of their money from China.

Risk: This is a 100% investment in equities with limited sector diversification. It is a riskier asset class than bonds or cash and is volatile, but the higher returns over time should compensate for volatility.

Fees: The total expense ratio (TER) is 0.40%. The costs consist primarily of management fees and additional expenses such as trading fees, legal fees, auditor fees and other operating expenses.

Alternatives: Its closest peer is Absa’s NewFunds S&P Govi SA Industrial 25, which uses intrinsic value and volatility in its selection criteria. NewFunds S&P Govi is trailing the Satrix Indi in terms of performance, but it is way cheaper with a TER of 0.21%. 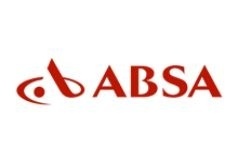