Check out the latest research note on info on ETFs from leading research house Intellidex. EasyEquities is the only place where you will find up to date info on all ETFs. This latest piece is on the ABSA NewFunds Inflation-Linked Bond (ILB) ETF, which tracks the performance of the Barclays/Absa South African Government Inflation-Linked Bond which consists of bonds issued by the South African government. This ETF is suitable for investors wanting to take on minimal risk and aim to preserve the real value of their investments.

Intellidex insight: Inflation-linked bonds (ILBs) are securities designed to help protect value of an investment. The bonds are indexed to inflation so the principal investment and interest income increases/decreases in line with inflation.

However, this doesn’t mean that returns from inflation-linked bonds for investors who do not hold the bonds to maturity are a linear function of inflation. While the interest received from bonds increases in line with inflation, the capital gains portion is driven by market forces such as investors’ expectations of future inflation and expectations of interest rates and credit ratings, among others. Thus, prices for ILBs fluctuate, reflecting investors’ perceptions of various economic drivers.

One aspect weighing on ILBs held by local ETFs is SA’s deteriorating credit ratings. SA’s long-term local and foreign debt is rated as junk – below investment grade – by two of the three main credit rating agencies, Fitch and S&P, and its investment grade rating by Moody’s hangs by a thread. That said, the negative investor sentiment on SA bonds, coupled with fears of a global recession, have driven yields of emerging market bonds up (and the prices down). SA’s benchmark 10-year bonds are offering a real yield (yield above inflation) of 4.21%, which is one of the highest on the market.

The NewFunds Inflation-Linked Bond ETF is one three ETFs that track ILBs issued by the South African government. The others are the Ashburton Inflation ETF and the Satrix ILB. There is little separating the three – they exhibit similar risk-return characteristics. The Ashburton fund is the largest with assets under management (AUM) of R327m. Satrix and NewFunds have AUMs of less than R100m each. This implies the Ashburton Inflation ETF is a bit safer from a liquidation point of view.

In terms of fees, the Satrix ETF is the most competitive with a total expense ratio (TER) of 0.25%.

Fund description:The NewFunds ILBI (Inflation Linked Bond Index) ETF tracks the performance of the Barclays/Absa South African Government Inflation-Linked Bond which consists of bonds issued by the South African government. It includes only those bond issuances in which National Treasury requires the primary dealers to make a market. 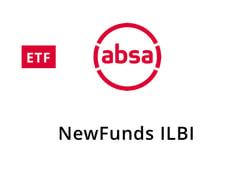 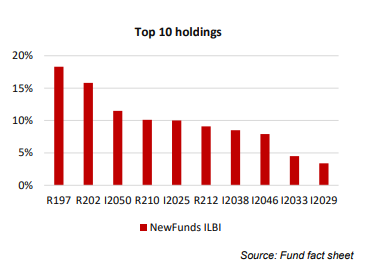 Suitability: The NewFunds ILBI ETF is suitable for investors wanting to take on minimal risk and aim to
preserve the real value of their investments. However, like other investments, the price of ILBs can
fluctuate, and if real yields rise, the market value of an ILB will fall. The fund can be used as the bond allocation in a multi-asset portfolio.

Historical performance: The NewFunds Inflation-Linked Bond (ILBI) ETF’s historical performance is not that impressive. Its overall returns lag that of inflation as well as domestic equities across the four time periods reflected in the table. The fund has not outperformed inflation or yielded competitive returns.

Fundamentals: Bonds are driven by investor expectations on factors such as the issuer’s credit profile, liquidity, interest and inflation. With South Africa’s bonds rated below investment grade by two of the three major rating agencies, perceptions on SA’s ability to repay its loans when they are due will remain key to the performance of bond ETFs. Any government actions or events which may be perceived to compromise SA’s fiscal standing, such as slow economic growth and fiscal indiscipline, will likely cause yields to rise, which will dent bond prices.

The lack of economic growth and funding of state-owned enterprises weigh heavily on the government budget. However, implementation of concrete structural reforms as outlined in Finance Minister Tito Mboweni’s recent economic policy paper may ease the strained government budget.

Inflation-protected bonds are sensitive to the trajectory of inflation and influence by interest rates. This is because they are linked to the consumer price index (CPI), from which consumer inflation is calculated. The nominal value of the bond is adjusted to account for inflation, which effectively keeps the real value of the  notional investment constant. So generally, when inflation is expected to increase, prices will be bid upwards, and vice versa.

Alternatives: The NewFunds (ILBI) ETF direct alternative is and Satrix (ILBI) with the lowest TER of 0.25%.