Intellidex Insight: ETFs that track the biggest companies on the JSE are popular because they invest in solid, blue-chip companies. An added advantage of Swix funds is that they weight constituents according the JSE register, which down weights dual-listed stocks. This means that while the ETF selects constituents based on their market capitalisation, companies listed on other exchanges as well as the JSE are down weighted according the proportion of the size of the foreign holdings. The higher the percentage held offshore, the lower its weighting in the ETF.

A secondary effect of the Swix formula is that it tends to limit exposure to resources/basic materials, most of which have primary listings on international exchanges. The cherry on top is that this investing method is cost efficient as it minimises costs because the ETF rebalances quarterly and only to reflect changes in the top 40. 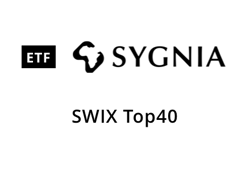 Suitability: This fund invests in equities and is considered to be an aggressive fund, suitable for long-term investors with an appetite for risk as it may undergo periods of high volatility. It offers investors a blend
of domestic and international exposure, with that diversification diminishing the risk to a degree

Historical performance: Funds that track SA’s major equity indices have been under pressure over the past year. The Sygnia SWIX Top 40 ETF was battered over the past 12 months, returning -3.1%, but resurged in the first half of 2019, returning an impressive 7.6%. Interestingly, the Ashburton Top 40 ETF, which is not SWIX-weighted but weights only according to market capitalisation, provided a stellar 13.9% return for investors in the six months to end-June. This is because resource stocks, which are down weighted in SWIX funds, have put in a good performance so far this year.

Fundamentals: The prospects for this fund are mixed as it generates earnings both locally and internationally – the latter because many of the top 40 companies derive big chunks of their earnings from offshore. MTN for example has major operations in many African, Asian and European countries.

The international exposure means the Sygnia Swix 40 ETF is exposed to economies that are doing better than SA while also offering a hedge against an underperforming rand. A positive trend internationally is the easing of monetary policies to buttress the slowing global economy. However, geopolitical tensions are increasing while the US-China trade relations are a constant cause for concern

In South Africa, a slew of recent economic data confirms the dire state of the economy – the International Monetary Fund has slashed SA’s GDP growth forecast for this year to 0.7% from 1.2% and to 1.1% from 1.5% for next year. This follows the severe 3.2% economic contraction in the first quarter of this year. According to the Bureau for economic research (BER), GDP growth is being hampered by load-shedding, weak demand, slow global growth and political tensions. Also, credit ratings agency Moody’s, which still regards SA’s sovereign debt as investment grade, is worried by recent development where the government is set to disburse R59bn to Eskom. A downgrade to junk status appears likely, which will increase government borrowing costs.